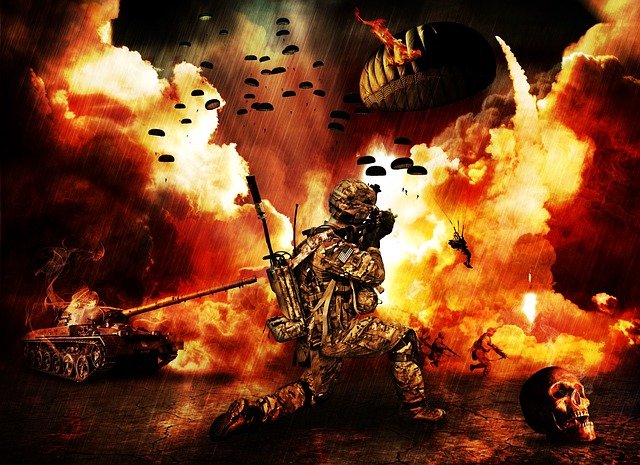 That morning had thin streaks of cloud trailing across the azure sky.
Tuesday the 17th, may 1968 . Port Harcourt was about to experience one of the coldest wars in Africa.

I was just nine.
The atmosphere was thick with tension, probably because of the news of Aba’s fall the previous night or the fussy debates on Radio Biafra, the most popular radio station in the south east, on whether Port harcourt would fall or not.

Amanda was in her black cot, the one she never grew tired of even though she was already four.

She was mumbling the new song every kid learned from Radio Biafra’s daily programs “Nigerian Soldiers coming right away. Get your bunkers ready to hide inside. For the bombing and the shelling will not kill the comrade spirit. We must proceed to the land of rising sun”

Its rhyme matched that of the famous “If you’re happy and you know it” classic. The Irony.

”Will you shut up Amanda! Who taught you that song?” Madam’s voice thundered as she approached.

Before Madam could reprimand me for not cautioning Amanda, The Professor, her husband ran in with the landline clutched firmly in his hands. His hair was in shambles and his face, disheveled. This was not the brisk professor I knew.
“Dear, Umunze just called me from the river coast. The Nigerian Soldiers have crossed. Port Harcourt is about to fall and we have to leave”

“That is not possible, we have the strongest barricades. if Umunze is right, How come Radio Biafra haven’t made an announcement on it. Leave to where anyway? What about our dreams? Our home. we’ve invested a lot in this place” Madam replied adamantly. But In spite of that, I could sense that beneath her defense, was a woman who believed everything the professor said.

“CHINWE AGU you’re not listening to me, those savages are coming for us. And you know they’ll attack our home first once they cross MILE 3”

His eyes trailed to Amanda “Nothing must happen to her”

Suddenly, an OAP at radio biafra interrupted with a message in a tone of urgency “Evacuate Port Harcourt NOW! The Nigerian Army have invaded and crossed the barricades. Leave your homes now. Take your Gold and children”

Before Prof could give Madam an “I-told-you-so” look, we heard frightening bangs at the gates.The Mischief makers had guns with them because I could hear the rattling noise. The very incoherent noise was accompanied with raw laughter and silly ululating.

Madam’s urine, a pale amber colored liquid, dripped on the red luscious Germany- Imported rug underneath. On a normal day, I would have stifled a laughter. But it was not a normal day.

Prof picked his car keys and nudged me to pick Amanda up. He led us out of Amanda’s room, towards the back door in the kitchen.
On our way to the kitchen, I tripped over Amanda’s big black teddy. I never really understood why Amanda loved the color BLACK at such a young age. The teddy must have been signatory to something. Something Obsidian and Evil. I say this because when we got to the back door, it wouldn’t bulge.

Prof kicked and heaved, but nothing. Madam and I pounded on the lock, but it wouldn’t even shake.

Come Out Wherever You Are!

“Prof, Prof come out wherever you are” voices called from the sitting room. The men had gained access in.

In that moment of confusion, I shoved Amanda into a cupboard nearby and placed my index finger on my lips while she gave a nod. We couldn’t afford to lose Amanda.
In a twinkle of an eye, the men found us: myself, the professor and madam.
“Prof Prof where’s that your golden daughter, the one the scientists at UN couldn’t stop yapping about” A bulky man bellowed. He was obviously the leader of the troop.

But I noticed something the moment I set my eyes on them. The men were not soldiers of the Nigerian Army, although they were clothed in the complete regalia. They had luscious hair like the Arabians and nose bearing semblance to the Caucasians. I didn’t know geography so I couldn’t place their Origins.

“Where’s that your daughter, I say! She worth a fortune to my clients. Do you know what it means to have at least 3L of a complete rare blood with no RH antigen? Just a single pint and Patriarchs from around the world will scramble to pay millions for it”

Now, Few years before in London where Amanda was born, it was tradition to test a child’s paternity status, blood group and all, after birth. But it was shocking when Amanda’s blood was discovered to not match her parent’s. Puzzled by this phenomenon, Prof had taken quarter of a pint of her blood for research at the university lab. It was there he discovered that Amanda’s blood was Golden.

There’s a very important antigen (protein) in the blood which is capable of causing immune responses. Some of us know our blood types as A+, O-, AB+ etc because of presence or absence of “Antigen A or B”. However, there are other antigens called Rhesus (RH) antigens but one out of it, RH-D is quite unique because it determines if you’re RH positive or negative.

Some people have all RH antigens but lack RH-D antigen and they are called RH negative.

Others have RH-D antigen inclusive and are called RH positive. Knowledge of this is very important during blood transfusions and even before marriage because it can cause fertility complications. But when a person doesn’t even have any RH antigen, it is a hematological condition known as the Golden blood syndrome (or Rhesus Deficiency Syndrome).

This was the type of blood Amanda had. The advantage was that her blood was so unique that she could donate to anyone on earth due to the absence of antigens. Her blood could pave way for new scientific discoveries and generate new research topics on genetic mutation.

People like Amanda are only 42 in the whole world and because of that, Prof had to relocate to Nigeria because her safety was threatened in Europe. At that time, I just knew Amanda was really special because the professor and madam told me so.
The gang of men were all so vile, threatening to slit his throat if he didn’t produce Amanda, when I heard Madam say “Here! This is Amanda” I couldn’t believe it when I lifted my face to realize that I was the Amanda, Madam was referring to.
“Little girl, are you Amanda?” the leader squatted. I could perceive the disgusting breath of stale fish.

Port Harcourt had fallen, but it was clear that these men were not part of the Nigerian Army. They just wanted Amanda and nothing more.

My lips quavered “Sir, Yes I’m Amanda.”
My statement caused professor to burst into uncontrollable tears. He wanted no part in his wife’s cruel declaration. He didn’t want to sacrifice me but he didn’t want his daughter captured more.

“Very well then. TIGER! Take her to the Van”
I quickly developed goosebumps all over my skin. But just before we left, there was a loud noise from the kitchen accompanied with a “MOMMY!!” cry.

The Men swiftly turned to pause. Madam bit her lips and recited all the prayers of the rosary she knew.

“Mommy it’s me Amanda, the glass plates fell on my head” The voice called out again. That was all it took for the men to rush into the kitchen to bring her out.

“So..you guys tried to trick me. I had a gut feeling this little Imp wasn’t your daughter because who in the world will give up their child so easily” The Gang’s leader lamented before he roared at me “Who are you?!!!”
“I…I, my name is Ugochukwu. I live with Madam and Professor”

“WHAT?!!! So you sent the maid to go with me, you want my clients to have my head??!. For this! TIGER!! Eliminate!”
Tiger, his lead minion cracked his local shot gun to release the most piercing sound I ever heard in my life.

I had never seen so much RED. Not once. It was crimson. It didn’t resemble the red poster colors Amanda used to paint her ugly drawings. Neither did it look like the red grounded tomato madam brought from the market every Saturday. It looked like a different Red, one that signified the loss of a life. It was that crimson that spewed from the professor’s jugular like a leaky tap.
Madam fainted at the sight.

It was either the deafening sound of the gun shot that made me notice the rich Brownness of the sturdy mahogany door the men bolted or the Painful Screams of Amanda as they took her with them.

I didn’t know if madam merely fainted or died at once. The Bomber planes could be heard from far. The Screams of Port Harcourt people “EVACUATE PH NOW”
About 150 decibels of sound couldn’t wake Madam up, so I ran.

I still remember the greenly lush of the path I took as I ran away from what I once knew as home.
In addition, I ran as fast as my little nine year old legs could take me.
I ran to a Freedom which was also my Doom.