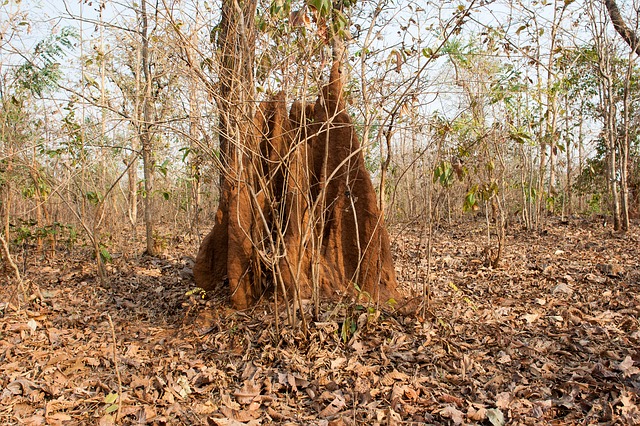 I once saw an anthill/termitarium sitting on an abandoned farmland. So, I got closer to have a detailed look like a surgeon armed with his scalpel and magnifying lenses ready to dissect, cut, excise while calling out to members of the surgical team to help with one thing or the other – would mine be different? No, just that my eyes would do the dissection while calling other parts of it for fine visual acuity to surgically explore the depths of the anthill.

I paid so much attention to the layers of this beautiful structure. I couldn’t see pillars suspending the depth of the small hut nor a dredge stuffed with concrete holding it firmly to the ground. And there, I would only see different circuitry leading in and out of the anthill. However, a closer loook revealed another mystery, the walls of this minihut are as strong as the difficulty insecurity poses to Nigeria. One will wonder how they came together to make a gel of water and mud, and with what tools they erected their mudcastle.

There were designs like pockets on the inside of the structure, like balcony which leads from one wing to another. Did I say balcony? A bridge would suffice, one which would stand the test of time. A kick won’t pull it down, the edges of an axe would assume it’s trying to harvest honey from its inside if used on the hill. If our head of states would humbly heed their advice, our roads would celebrate silver jubilees.

While standing, I could see ants making their way in and out of their home whilst delivering different assignments. The height of the busyness in this clime makes me think about my life as a human. Some were carrying tiny logs and bits of organic material into huts and some were patching the damaged wall of their Jericho. Some, in pairs, were carrying other ants, injured ones I suspect. Others were busy removing the debris of leftovers making their territory messy. From the stories I’ve read, some nurses are somewhere down the anthill taking care of the queen, the only fecund one in the kingdom. Apart from the queen, some nurses are attending to injured fellows. Don’t tell me they have their iodine, methylated spirit and cotton wools – the acts of insects coincides with that of human, let’s not say supercede.

Not long afterwards, I could see an advancement with heavy thuds towards my big toe. These ones have strong fangs fixed on their head with relatively big body compared to others. They are the soldiers of their kingdom and they already considered me an enemy to their calm and tranquility. If I could hear them, the major general would have echoed, “fire! fire! fire!”. I simply helped myself by lifting my soles. I won’t be stuffed with their venom while appreciating nature.

LESSONS FROM THE ANTHILL

I had only known medicine as a profession of medical doctors and maybe nurses. But in recent years, I’ve come to know medicine as a multifaceted discipline structured to work as an holistic unit to care for man. Medical laboratory scientists, physiotherapists, nurses,radiographers, doctors, medical and dental, anatomists, physiologists are the pawns in the game of medicine. Every profession has its distinct role to play like the ants in the anthill. Each and everyone of them has designated offices and they wouldn’t steer off the course of their calling. No one reigns supreme over the other neither is one the alpha & omega of medicine. In short, everyone thrives in his path and brings his quota to the luncheon of medicine.

If the older generation failed in addressing this intraspecific apathy and cantankerous discordance in the anthill of medicine, we all through this piece have travelled to the anthill in Afolabi’s farmland and have seen the need to be holistic in our approach to medicine. We will be a formidable unit with unrivalled success in our healthcare system. Besides that, we would remove selfish professional prestige and embrace selfless life-saving approach and mentality to people’s lives. We would burn our shoulder pads and assume our deltoid muscles are atrophied. And then, like the anthill, medicine will be a strong edifice with existent yet anonymous pillars.