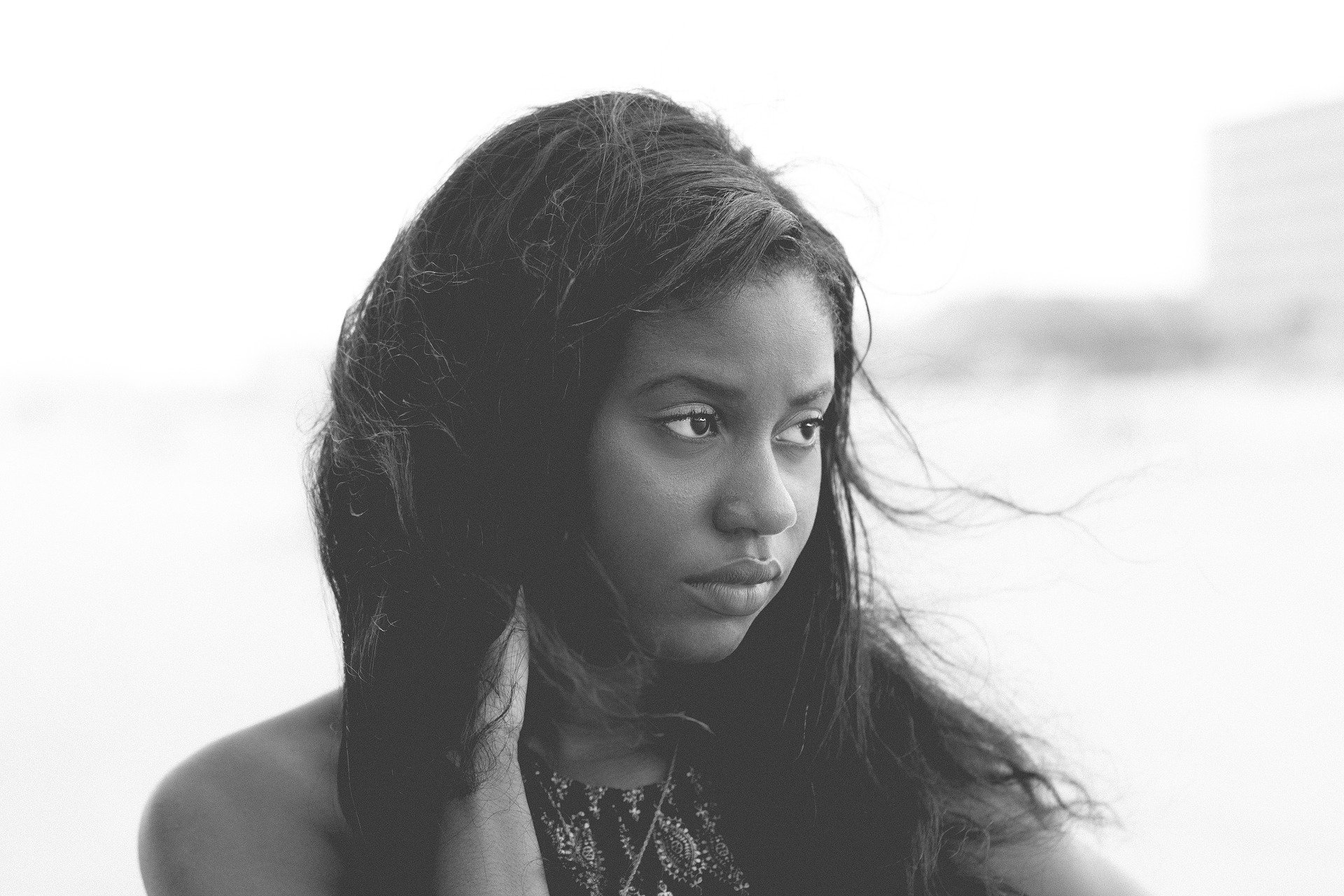 Cheta gnashed her teeth frantically as she sat behind the doctor’s office door, visibly sweating despite the cool harmattan breeze that enveloped the hospital’s corridor. The last news her family received from this same doctor was incredulous.
From Malaria to the unthinkable

She didn’t need to eavesdrop to hear her mother’s cries of; “JESUS!!”, ” The devil is a liar”, “Not my Cheta!!”, from the doctor’s office. The teeth she had been grinding for the past 10 minutes accidentally grazed her lower lip a little too hard, causing it to bleed out.

In the twinkle of an eye, Cheta’s mum dashed out the door to greet her with the Japanese “Kizami-zuki” throttle resetting punch. “Akwuna kwuna! Onye Iberibe! Ashawo” Cheta’s mother rained insults.
She violently dragged cheta’s arm which played the role of a protective shield against the punches and then started to scream; “Your father and I sent you to the university to get a degree to make something useful out of your life, instead you decided to bring a bastard to my house after just the first year…Level one ooo!! chetaaa”

Cheta’s Mother Broke Into An Uncontrollable Stream Of Tears

Even Albert Einstein’s theory of relativity couldn’t cause the level of confusion that laid bare on Cheta’s face”Mummy, that’s not true. It must be wrong. Tell them to check again”

The doctor firmly held Cheta’s mother before she could gift cheta another round of Japanese-styled martial art punches.
Cheta’s mother broke into an uncontrollable stream of tears. “Cheta, why me? why did you do this to me…What would I say to your father? They’ll call me a useless mother…Ahhhhhh”

The older woman’s display of emotions moved presence in that corridor, causing Cheta to receive a series of wicked stares and finger-pointing.
Cheta instantly got on her knees to grab the doctor’s feet “Dr, I swear to God. I’ve never had sex in my life. I can’t be pregnant. It must be malaria. Please save me. I’ll give more of my blood this time. The Lab scientist took just a little the last time. Please run the test again”

Before the drama turned the hospital into another Fuji House of Commotion, three nurses rushed in to calm the situation in that section of the hospital.

“Miss cheta, we ran this particular test about four times as per your mother’s request. That’s why if you remember, we called to take your blood sample again because your mother rejected the first. I’d advise you to collect yourself, calmly revisit your past experiences and reconcile this matter at home with your family before commencing antenatal sessions” The doctor carefully explained

Cheta felt the world around her spinning in multiple directions. How could she, Cheta Grace Obiora, and antenatal be put together in the same sentence at this time of her life?
How?? When she had never had sex before!
“Everyone in this hospital must be mad and untrained,” she thought aloud.
She ran out of the hospital in a frenzy. She’d rather die than face her father at home. Cheta couldn’t imagine how a whole Elder Charles Obiora of the Haven Grace Ministries would receive the news.
That evening, Cheta ended up in her favorite relative, Aunty Vivian’s apartment.
“Cheta, stop crying. Calm down and tell me what happened” Aunt Vivian Coaxed.

Can A Virgin Get Pregnant Without Having Sex?

“Aunt V. I don’t even know what’s going on anymore. See, It all started when I began to feel sick a week ago. The normal malaria symptoms; Fever, nausea, body pains, and the rest. I told my parents and they bought me drugs but nothing changed. My dad suggested we visit the family hospital when the vomiting became frequent.”

Cheta paused to blow her nose before she continued
“The lab called to take my blood sample on two different occasions after they ruled out the presence of malaria parasite. First of all, they brought the pregnancy report but I laughed it off as normal Nigerian hospital and negligence. My parents didn’t even accept the result. So we decided to run the test again”

Aunt V listened in horror. “All this was going on and you didn’t tell me?? Okay. Hold on Cheta. You know I’ll always be here no matter what happens. So I want you to tell me the truth…Who’s responsible?”
“That’s not even supposed to be the question. Aunty V. I swear to God who made me. I’ve never had sex before”
Aunt V’s brows furrowed in confusion “That’s strange. So you mean, you have never had any sexual relations with a guy. At all?? Are you sure?”
“Yes, I’m sure. The highest I’ve ever gone with Isaac, that guy I told you about the last time, is just kissing and foreplay”

“Cheta!! Tell me everything about that foreplay. What happened?”
“Nothing serious. He begged me to allow him to put the tip but I didn’t let him so…uhm..he just..”
“Cheta. He just what??! Talk!”
“He just rubbed his stuff on the outer area but there was no penetration, I promise”
“Was there any ejaculation at any point?”
“I don’t know. I felt rubbery wetness on my thighs but I don’t know…Don’t know”

Aunt Vivian jolted up to assume a thinking position “Cheta. Are you sure you weren’t raped? Maybe he drugged you and then forced himself on you”
“Aunty…I’m very sure nothing like that happened. I have never slept in his house, even for a short nap. I don’t think there was any of such compromising situation”
“Dear, I have never heard of anything like this in my entire life. this would be very hard to explain to your parents o. Could this be spiritual or something?”
At that point, nothing made sense to Cheta anymore. A spiritual pregnancy was definitely the most ridiculous thing Cheta could present to her parents.
Aunt V rang Cheta’s parents to inform them of their child’s whereabouts but they couldn’t care less. As far as they were concerned, Cheta was dead to them.

The events that took place later that week confirmed her greatest fears. She decided to confide in Isaac about the situation. Isaac in turn did the most. He took to social media to call her out.
“After denying me the pleasure of her coochie, The slut had her privates properly dug, and then she comes up with such an outrageous and ridiculous lie of me being responsible for a pregnancy I know nothing about. Howwww?” An excerpt from his Twitter post read.
Cheta deactivated her Twitter account when the banter became unbearable.

“Vivian! I think I know what may be wrong with your niece” Lawrence, Aunty V’s fiance called one fateful evening, a fortnight after Cheta’s story went viral on Twitter
“So, I spoke to my physician friends in SA and did my own research here and there. Have you ever heard of the term ‘Virgin Pregnancy’?”

“You see. A virgin pregnancy is when someone who has never had penetrative or vaginal sex gets pregnant. It’s a rare phenomenon but the fact that it has happened to some women across the world validates its occurrence. I think that’s what happened to Cheta”
“Virgin Pregnancy? Babe…How is that even possible? It goes against the logic of sexual reproduction considering the fact it wasn’t an IVF“
“Vivian. Virgin Pregnancy can happen when sperm get into the vagina by having semen or pre-ejaculate on the fingers and close contact with the vagina.
if the male ejaculates near the vaginal opening, or his erect penis comes into contact with the body near the vagina, as long as sperm manages to get into your vagina, there’s a chance you could get pregnant ” Lawrence further explained.

You May Also like: HAMILTON NAKI: The Uneducated Surgeon

Virgin Pregnancy….Oh My God. I Have To Tell Cheta

“So there’s a chance that Isaac might actually be responsible. Oh my God. I have to tell Cheta”
Aunt Vivian hung up before Lawrence had the chance to say goodbye.
She called for niece as she flew up the staircase, deliberately missing two steps to get faster to cheta. What she met as she stepped into Cheta’s room was horror unfolding under the gaze of her eyes.

Cheta had hung herself high up the ceiling, already on the verge of asphyxiation.
Aunt V began to scream hysterically.
It was Aunt Vivian’s banshee-like scream that woke Cheta up from the turbulent nightmare

Turns out that she had fallen asleep in the process of packing the last set of her luggage.
“Jesus! What kind of dream is this”
Just then, a message alert on her phone came in.
FROM ISAAC.
“Babe, are you still coming to my place by 4? We need to meet before you leave for the ASUU strike. Miss you already…”