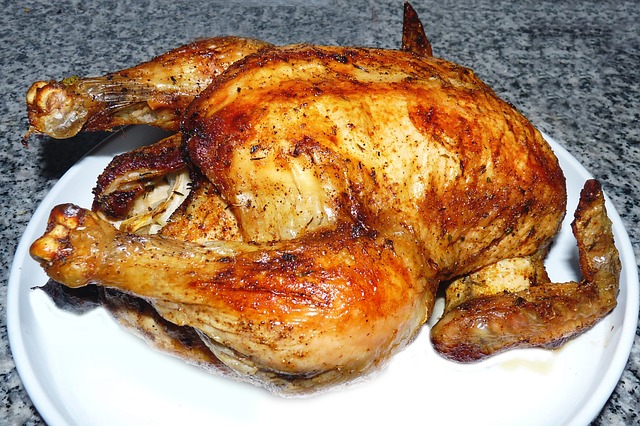 There are so many reasons People love December. To some, it is because they meet their Siblings, Friends and have some get-together. To most Students, it is because they get a short break from the School’s stress, except some Medical Students. Some love it because of Detty December. Some are indifferent, but mine is a different case. I love December because I get to eat Chicken during Christmas. I know it sounds awkward, but yes, there is a peculiar thing I can’t seem to explain about how my Mum prepares the tasty Christmas Chicken.

Christmas day has always been a big Day in my House. It’s a Custom that the Extended Family, both Home and Abroad use the Festive Season as a means of get-together and my House has always been the Centre-of-accommodation. I get to see my aged Grannies. I remember their Room was always full of the different scents of herbs brought from the Village, especially the bitter ones. My Grandfather believed that bitter herbs are always good for the body, he named it as part of the Doctrine of Signatures, until Dr. Martins on one Occasion, corrected him that bitter herbs could also be toxic and life-threatening if used wrongly.
I am always happy to see my very stubborn Cousin, Obabu. We resemble ourselves a lot. Occasionally, we get to say things together unplanned. Obabu is so fast that before I get to say Jinx, he does and collects huge Money from me. Of course, I cannot let my Christmas Chicken go for that.

Mum, Christmas is incomplete without the Christmas Chicken!

‘Mum, I don’t get you. I mean how else are we celebrating Christmas if we don’t eat Christmas Chicken?’ I asked. ‘Are you kidding me? Will you die if you don’t eat Chicken? My Mum replied looking Surprised. ‘Besides, I’m not financially buoyant this time, so just accept whatever you are given. Okay? ‘She concluded. ‘Madam its true o, you know say this place be like Family House wey everybody dey celebrate Christmas. Forget being buoyant, I know a Poultry Farmer well well wey go sell correct chicken for una, no be exaggeration, just one Chicken from him go belle-full everyone and…’ ‘Eee na matter wey no concern u na hin u con dey settle, get out!’ My Mum shouted at the Gateman. I wasn’t happy, but there was nothing I could do.
The D-day came, the House was full of Visitors, different Delicacies, and beautiful decorations. We attended the Morning Church service. It was interesting. Pastor Paul Preached Perfectly.

And the Merriment began!

After the Church service, we went back Home and the Merriment started. To my Surprise, I saw the Maids Preparing Chicken. I ran to my Mum who was busy greeting some of our Visitors. ‘I thought you said there wouldn’t be Chicken’ I said happily. She smiled and told me God provided. Everyone came to the Dining Table and ate to their Satisfaction. I remember Obabu ate 2 wraps of Pounded Yam and Vegetable Soup with Six big Chicken-drumsticks. My Grannies could not eat the Chicken, because their teeth were all gone. I ate four wraps of Pounded Yam, Vegetable Soup and the Chest part of the Chicken. A nice time we had at the Dining Table. Everyone retired to their Bed around 1am.
It was few minutes to half-past Six when I heard some noise in the house. I knew something was wrong because the noise was unpleasant. I went downstairs to see what had happened. The first person I saw was Obabu. He was looking pale and sick. ‘Obabu, what’s wrong,why are you looking pale?’ I asked him. ‘My guy, I can’t explain what exactly the problem is. I have been purging since 3am. I’ve gone to the Toilet Six times now, yet I feel more urge, no be Juju be that? be like say the last gal wey I dump has gotten back on me, chai! Amaka’ He said sickly.

Could it be the Christmas Chicken?

‘Have you taken any Medicine?’ I asked. ‘No, I’ve not’ He replied to me. ‘That’s the first thing you should have done, I’ll be right back’. I was going upstairs to take some purging Medication for Obabu when I saw my Mum shouting by the Dining-table’s Window, ‘Dauda, go pump Water now! I still need to use the toilet.’ ‘Mum what is wrong?, don’t tell me you are also purging’ I looked puzzled. ‘Please save me the questions for now. Hurry up, tell Dauda to pump more Water’, she said running to her room, I guess she was running to the Toilet.

I went out to meet Dauda, our Gateman. Surprisingly, I heard Dauda’s voice from his Toilet chanting some Incantations. ‘Oga Dauda, what’s wrong?’ I asked him from his Window. ‘Chai, I no know wetin happen o, my Village People are at work. Na the Sixth time I dey go toilet be this’ he replied. ‘Wahala!’ I mummed. I switched on the Pumping Machine. Luckily, there was Electricity at that time. I went back to the House. I could not see anyone around. By the time I checked, they were all in their Toilets, except my Grannies who were still sleeping. It was this time I knew I had to call Dr. Martins, the Family Doctor, and inform him of the situation of things. He arrived in about 15 minutes after I called him.

‘Where is everyone?’ he asked me. ‘In their various Toilets’ I answered him as I was closing the Door.
He had to wait till my Mum and a few of my Family members came out. He gave them some Medications and set them all on Drip. A Few moments later, the rest came out and he also attended to them. Consequentially, they looked better. ‘This is serious. What happened ma’am?’ Dr. Martins asked looking at my Mum. ‘I can’t explain why I was feeling the urge to poo after using the Toilet five times, I feel so weak, dehydrated, and light with sharp Stomach ache. I’ve also vomited twice’ she said in a low voice. Every other Person testified that they experienced similar Symptoms.

It is Food Poisoning

‘I guess it is Food Poisoning, but you’ll have to visit the Hospital for proper Diagnosis and Treatment’ the Doctor said. ‘I’m confused, how come Alex and the Grannies were the only ones not affected?’ He said looking at me. ‘Well, let’s proceed to the Hospital for proper Treatment.’ He concluded. Dr. Martins’ Prediction was confirmed at the Hospital after some Medical tests. It was Food Poisoning. How come I wasn’t affected? We ate the same Meal, although of varying quantity, yet, I still ate from the poison. Could it be that I have a stronger immunity or the poison is not manifesting yet, or it wants to manifest in other ways? A Series of questions were just flowing through my mind as I sat in the Doctor’s office. The Doctor requested for the remnant of each food eaten before the incidence.

Three days later, the Doctor came to the House and requested for a meeting with everyone. Everyone was seated. I was eager to hear what he has to say. ‘Good day everyone, I hope you are all feeling better, the Medical tests conducted have shown that the Chicken consumed contained Piperazine, a deworming Medicine for poultries. The seller is meant to observe the withdrawal period, but I guess, because of profit, he did not. Mrs. Coker, where did you purchase the chicken? I’ll advise you to stop buying stuff there. It could have been worse than this.’ Dr. Martins said. ‘I bought it from a Mallam. It was Dauda the gateman, who told me about him. I thought it wise to buy his Chickens because they were big and not too expensive. I’m not financially buoyant, and it wouldn’t be nice not to have Chicken for Christmas’, My mum said.

You may also like: Myths About Peptic Ulcer You Believed were True

The Chest part is the safest part of a Chicken to eat. It disperses the Drug to other parts of the body too quickly during the withdrawal period, so it contained no or just very minute quantity of the Drug, therefore his Immunity is strong enough to overcome the little quantity of the drug which is a Poison in the Body System. After the withdrawal period, every part of the Chicken is safe to eat.’ The doctor concluded. My mum apologized to everyone for the horrible experience they went through. I never knew the Chicken Chest is the safest part to eat, it was only my favorite.