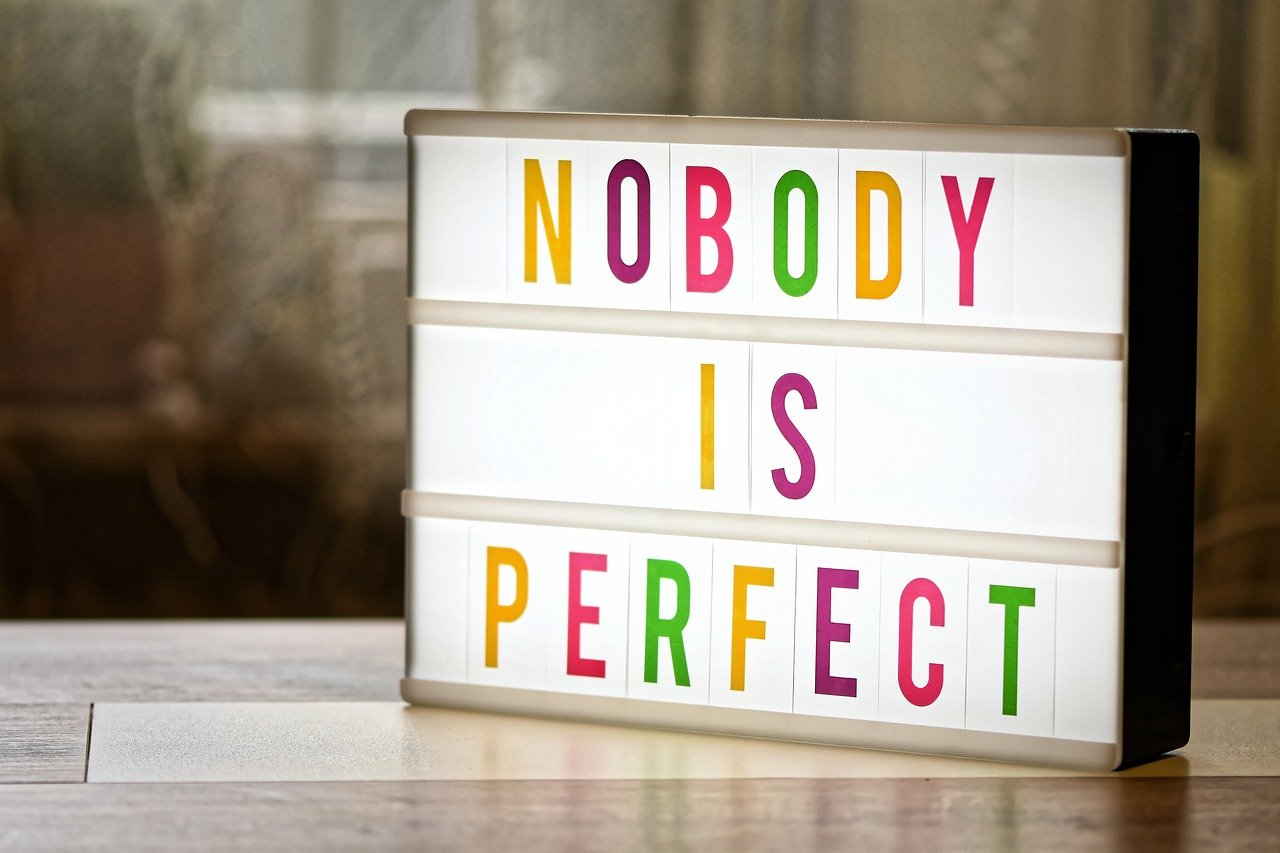 “Busola, why didn’t you write the test? Your teacher said you left before the test began and didn’t show up again possibly because of fear of imperfection” Busola’s mum said with a furious look.

“Mum, I don’t know. I felt so unprepared and I was afraid I would fail” Busola responded, shaking slightly.

“But you have been preparing for this test for so long!” Busola’s mum shot back

“I’m sorry mum. I’m really sorry for letting you down” Busola apologized with tears in her eyes.

“Go to your room and don’t come out till I send for you.” Busola’s mum instructed

Mrs Tayo was very worried. Her daughter exhibited too much fear of failing. This was unlike normal fear.

This wasn’t like the typical ambition for super excellence. This fear resembled an over excessive desire to be perfect. To the outside world, it looked like a good thing but she knew it wasn’t. She couldn’t count how many times Busola would avoid situations just because she dreaded failure; even after she had prepared so well.

She recalled when Busola was little, if she was colouring a picture in her colouring book and mistakenly coloured outside the lines, the young child would be moody for days.

Or was it when she was celebrating her 10th birthday that a kid poured juice on another kid and a fight broke out. Busola cried for days because she felt her perfect party was ruined.

Mrs Tayo wondered what kind of extreme perfectionism this could be. It terrified her because she feared for when Busola would no longer be under her care. How would her daughter cope in a world filled with disappointments and constant failure?

Busola always worried about her decisions. Her overthinking often led to procrastination and indecisiveness. Her desire to always be perfect often led her to avoiding anything that could result in imperfection instead of her exploring and learning from her mistakes.

Mrs Tayo wondered how things got this bad. She knew her late husband; God bless his sweet soul, had been such a perfectionist but it wasn’t this bad. This trait that Busola displayed seemed to be more of madness.

She heaved a sigh and decided that it was time she took her daughter for a check-up and therapy. If things continued this way, she suspected that Busola would grow to become self destructive.

She booked an appointment with a famous mental health specialist. After a series of tests, the psychiatrist told them he had gotten his diagnosis.

“Madam, good day. From my findings, your daughter has Atelophobia,” Dr Kunle remarked.

“Yeah. This is an extreme fear of making mistakes. The victim usually spends lots of time worrying about mistakes they could possibly make or judging themselves severely for the mistakes they have made in the past. Their extreme perfectionism can lead to depression and avoidance whereby they avoid situations that may lead to them making a mistake or failing” Dr. Kunle further explained.

“Ayemi oooo! I knew it wasn’t just normal. She would miss tests or a school presentation frequently just because she thought she would flop even after hours of preparation. And I noticed her constant moodiness and fear of imperfection as well” Mrs Tayo exclaimed

“Those are results of the phobia she has. Victims also set unrealistic goals and have unimaginable expectations for themselves and then they do not even proceed to work on these goals because their fear of imperfection crushes their confidence. The sad part is that Busola cannot help this at all. Madam, I’d like to ask, do you have a similar case in your family or did Busola experience any sort of extreme criticism growing up?” Dr Kunle asked

“Yes doctor. Her father was a perfectionist though it wasn’t this bad. His mother and father too seemed to always drive them to achieve perfection. He was really hard on her as a growing child before he passed. If she didn’t have a perfect score in her test, he would often yell at her and call her a failure” Mrs Tayo said almost in tears

“I didn’t know it would get to this point Dr. He pushed her so hard as a growing child. He wouldn’t let her play with the other children because he believed that only failures played. His mother and father too raised the bar so high for her at such a tender age”

“Madam, it’s alright. It’s not your fault. How would you have known this would happen”

How do I get over my fear of imperfection?

“Dr, please, is there hope for my daughter to live a normal life?” Mrs Tayo asked still sobbing

“Of course. It won’t be an easy journey but with patience, Busola can overcome this fear of imperfection. Many patients who have suffered from Atelophobia have gone on to live normal lives.”

“So what needs to be done Dr?” Mrs Tayo asked

“We will carry out a series of psychodynamic psychotherapy to understand the situations or events that trigger the extreme desire to be perfect. We need to know what makes her anxious and worried. Then we will also start Cognitive Behavioural Therapy (CBT) so we can change the negative thought patterns and chains that lead to overthinking and avoidance. This will also help in treating her anxiety, fear and depression…

Your daughter will also need exposure therapy. She needs to understand that failure or fear of imperfection is not a bad thing. It is a part of success. Failure simply means you have to try again but maybe differently this time. She needs to learn how to fail forward and not beat herself up everytime she flops or makes a mistake. We would need to expose her to situations that lead to failure so we can restructure her behavioral response…

Exercises like yoga and talking sessions will also help. We will place her in a community of people who are also recovering from Atelophobia so she will know that she’s not alone on this journey…

My only request from you is that you encourage your daughter on this journey. Be patient with her. Overcoming this fear of imperfection will take a while and she needs all the support she can get. If possible, avoid exposing her to harsh situations that make her question her worth. We have begun a campaign to sensitize people, especially parents, on the damaging effects that harsh criticisms cause and it would be helpful if you can join this campaign. Sensitize your neighbors, friends and even church members on this subject.” Dr Kunle responded

“Eshe sir. Thank you so much for this enlightenment. Indeed, the African culture has encouraged emotional and psychological abuse in the name of discipline. If I knew, I would have refrained my husband from torturing our daughter so much. I will do as you have said sir” Madam Tayo says.

You might be reading this right now and thinking you might have Atelophobia – fear of imperfection, however, if you can encourage yourself after a setback and keep on pushing, you do not have Atelophobia.

What are the symptoms of Atelophobia?

People who suffer from this extreme fear of failing or making mistakes are tortured by this fear every single day. Their minds are a battleground of endless trauma and anxiety. They cannot encourage themselves or give themselves hope. Instead, they subject themselves to self torture by mentally beating themselves up for whatever mistake they’ve made in the past.

Due to the connection between the mind and body, they also suffer
Hyperventilation
Muscle tension
Headache
Stomach ache

And they have to endure this every single day.

Growing up in an environment which gives little room for flexibility or making mistakes often results in Atelophobia. While excellence is a virtue, it is without doubt that to err is very human. This ultimately means that we should offer room for people in our lives to learn from their mistakes without being overly judgemental or giving extreme criticisms.

By writing about this subject, I have done my part in sensitizing the world around me. My sincere hope is that you do the same as well so we do not expose individuals to traumatic experiences that give rise to Atelophobia. Amarachi Godswill-Nwankwo is a prolific writer who enjoys educating her readers on subjects that are relatable yet not spoken of often.

Her contents are spiced with minty freshness and exciting flavours that keep readers hooked from top to bottom.

Her journalistic ability to analyze complex subject matters and consistently develop interesting and relevant contents is definitely something her readers enjoy.

She is a medical student at the prestigious Obafemi Awolowo University.

The Diary of a Medical Student: A Special Preview