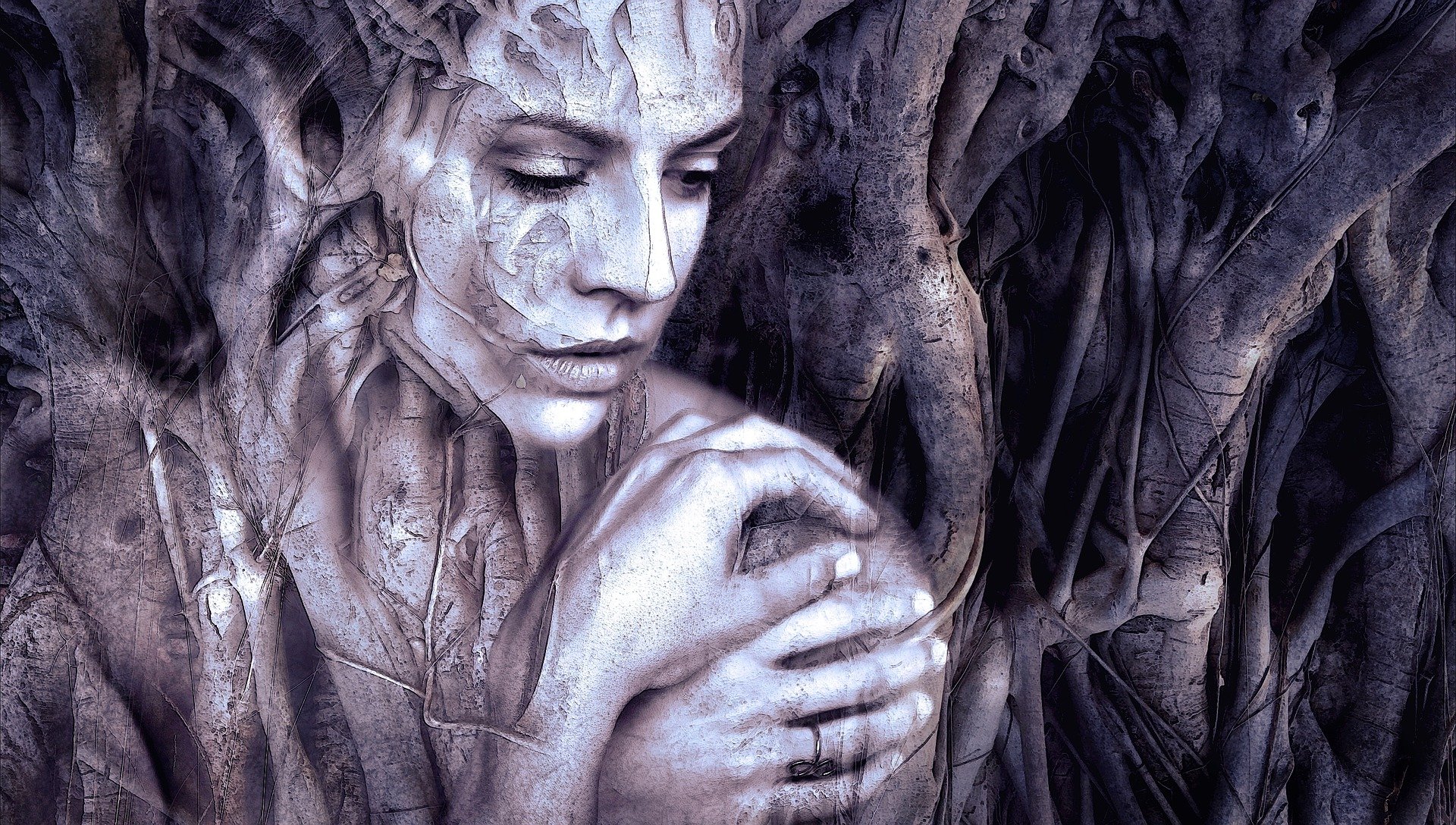 The curse of Ondine! My name is Ondine, an immortal witch and I am 900 years old‍. I’ve watched humans live and die, I’ve seen nations built and destroyed, I’ve observed how quick the human world evolved and how humans cared for each other and at the same time stabbed each other at the back. A lot of things occurred and I witnessed them all but my hatred for humanity never changed. I took pleasure in watching them suffer and die. Their agony was my joy and their pain, my gain.
You must be wondering why I hate humanity so much or what the legend of the curse of Ondine is about.

There was a war between my kingdom, Tharus and the kingdom of Midos. Before the war, we were angels in Heaven until God banished us. Our aim was to lead humanity astray and destroy nature. The kingdom of Midos betrayed us when they started having affections for humans. It was against the plan and everything we stood for but the Midos grew weak and instead of wrecking humans, they were protecting them. To put an end to that, we had to stop them and the only way was to kill them.
War broke out between us and even God could not stop us. It was a bloody and brutal night. The battle took place in the sky. Two immortal kingdoms fighting for their own interest. Our assembling caused rumbles in the world of man; our clash resulted into lightning; even our screams were like echoes of thunder and tears dropped unto earth like rain.
I’ve seen nations of men fight each other but none can ever be as epic as our war. Unfortunately, Tharus, my kingdom, lost to this great war. Many of my people lost their lives. I saw my family die before my every eyes and I hated myself for being helpless. When we couldn’t bear the loss, the rest of us that were standing retreated and fled. When the war died down, I waited for days for my beloved husband to return, but he didn’t. Not until I returned to the battle field to meet my husband’s dead body. The pain I felt from our defeat in the war couldn’t compare to the one I felt when I realised that I wouldn’t see my husband again.

Everything that happened was all man’s fault. For years, we were forced into hiding and we lived cowardly. Our defeat, a thing of shame and our dwindled numbers, caused loss of hope. Over the years, I didn’t fall in love with anyone neither did I get married. One fateful evening, our king requested for an urgent meeting. In the meeting, he demanded for a sacrifice. One of us was to leave our immortal form behind, become a mortal and go to the world of men. That was the only thing that could renew our strength and bring about our redemption. Everyone was afraid to volunteer. No one wanted to die like a mortal. Nobody wanted to die like men. When no one volunteered, I did. I agreed to be the sacrifice. There was no point in living again. I had lived for hundreds of years without my husband. What difference would it make if I died?
The king gave me his blessings, stripped me of my immortality and cast me into the world of men, the world that I hated so much. I fell into darkness and I lost consciousness for days. Two days later, I felt someone tapping me to wake up. “Hey lady”, I heard the person say. “You shouldn’t be sleeping out here”, the person said again. I didn’t want to wake up as I was still enjoying my sleep. Not until the person tapped me harder and forced me out of my sleep.

This vigorous shaking took sleep from eyes. With anger and curse beneath my breath, I turned to see who it was. Indeed, it was a figure to behold. A man with sparkling eyes as the ocean when smote by the morning sun; face smooth like clay, and worthy of a long gaze. Much more than that, his physique was enough to assure a drowning senorita of safety. Where in the far ends of the earth did this man in god-like form rise?
“Ugh, are you lost?”, he asked and it brought me out of my trance. I tried to respond but I had lost my reasoning.
“Are you fine, lady?”
“No, I’m not”, I said after regaining my speech.
“What’s the matter?”, he asked.
“I’m lost, I replied.”
“Yeah, obviously. Sleeping by the beach is so weird. How did you get there?”
“I have no idea too.”
“For real? You have a family or friends?”
“Nobody. It’s just me and I have nowhere to go to.”
“That’s creepy.”
I nodded my head, not knowing what to say again. Mortals like him wouldn’t understand my history.

“Are you hungry?” He asked and I wondered why he was being nice. I should have snarled at him or walked out on him but this guy intrigued me.
“Yes”, I replied. “Very hungry”.
Follow me. There’s a restaurant across. Anything you want, bills on me”. He stretched out his hands, I took it and he led me to the restaurant.
On getting to the restaurant, I saw a lot of people there. Seeing them reminded me of the great war that happened years ago between Tharus and Medos. Beholding them reminded me of our defeat and the loss of my husband. While I was lost in my thoughts, a girl passed by me and hit me with her shoulder. She turned around to apologise but my anger got the best of me. Without thinking, I turned to slap her. Everyone around turned to face us. The girl wanted to slap me back but her hands were stopped by the guy that brought me to the restaurant.
He led me out of the restaurant in order to stop the issue from escalating.
“Why did you slap her?”, he asked.
“She hit me!”, I replied angrily.
“It was a mistake, she didn’t do it intentionally”
I looked at him and the look in his eyes seemed to be calming me down.
“Who are you? Why are you helping me? You should be minding your own business”, I said softly.
“My name’s Daniel. I don’t know why I’m helping you either but I feel like I should. Besides, pretty damsels shouldn’t be in distress.” He said and smiled.
“I’m Ondine”
“Ondine? You have a unique name”.
“Thank you”, I said and smiled.
“Come, let me take you to another restaurant”

Soon, I had fallen in love with Daniel. I didn’t believe it either but I was indeed in love with him. He loved me too, cared for me, looked after me and helped me to adapt to this wicked world. When he asked me to marry him, I didn’t hesitate to say yes. Months later, we got married and I was living my best life. He didn’t know about my story and I didn’t intend to tell him. Our marriage was a perfect love story or so I thought.
Weeks after our marriage, he began to return home late. He had little time for me and paid less attention to me. When I asked what the matter was, he gave excuses of work. I let it slide at first but later, I couldn’t bear it. On a Saturday morning, he left the house in his car and out of curiosity, I followed him without his awareness in a cab. His car stopped in front of an apartment and he walked into the apartment. I came out of the cab too, paid my fare and remained outside wondering who he came to visit. I stood outside for the next twenty minutes and when neither he nor his friend came out, then summoned courage to enter the apartment. I wanted to knock but my instincts kicked against it. I barged in and my jaw dropped at the sight of what I beheld.

My husband was having sex with another woman on the sofa. They both turned to face me and my husband hurriedly got up. His face was white from shock. He wasn’t expecting me
“Sweetheart, I can explain”, he began
“Explain what???!!!!!” I yelled with tears streaming down my eyes. The other woman scurried off into the room.
Daniel looked at me and went on his knees. “Forgive me”, he muttered.
“Who’s she?” I asked, still swollen with anger.
“ That’s my ex girlfriend”, he replied.
“Wow”
“Ondine, it was a mistake. You know I love you”
“Liar!! Goddamn liar! Everything was all a lie from the beginning. This is why I never liked humanity and the stupid me fell in love with you after everything your people did to my people.”
Daniel was confused. “What are you talking about?”, he asked, still on his knees.
“Daniel, there’s nothing between us again. We’re ending our marriage now and you won’t go unpunished”
“Ondine, please stop this. It was just a mistake. I promise it’ll never happen again.”
“Save your speech. Before I go, I’ll place a curse on you – the curse of Ondine. For what you’ve just done to me, you shall know no rest. If you sleep, you shall die in your sleep. So be it. Goodbye”

“Ondine, what are you saying?” But I had walked out of the apartment in sorrow and grief. And the mythical tale of the curse of Ondine began.
Daniel on the other hand battled with my curse for years until he died. Each time he tried to sleep, his breathing would cease. The curse of Ondine didn’t end with his death but passed down from generations to generations. Soon, the modern world gave the curse of Ondine a medical term “Congenital Central Hypoventilation Syndrome.” Irregardless, the purpose of my sacrifice was not in vain. My kingdom renewed their strength and were granted redemption. Before I die, to lift my curse, you have to sacrifice a human to sleep in my grave with me. Humanity is weak, they can’t do that, so my curse shall live forever! THE POWER OF CONSISTENCY