“And the award of excellence is presented to Dr. Omotola Kimberly Dara, for the selfless service of humanity during the pandemic, playing a major role in combating the virus”
A moment passed and there was no response. The master of ceremony repeated his announcement and when eyes started trailing around the venue, being quite sure that they had seen me earlier in the evening, I reluctantly decided to go receive the award.
More often than not, recipients of a prestigious medical award tend to be emotional when they are called upon to receive their awards. However, in my case, I was nowhere next to emotional, and unlike the happiness expectations, I was actually sad I was the recipient of the award.
Twenty three years, a pandemic struck the world. The way it shut down systems of the world took everyone by surprise. At that time, I was a final year medical student who was working as an intern in my college’s teaching hospital. It was one of most reputable medical colleges in Nigeria. My class had been under the supervision of Dr. Clark Iniform- one of the top pathologists in West Africa, who happened to be the Chief Medical director of the college. Being his student was a thing of glory and luckily for my classmates and I, we had been allocated to study under him. It was simply a glorious expectation as we looked forward to diagnosing and treating illnesses of all sort but when an opportunity presented itself we nearly chickened out.
“Dara!” Donald, one of my colleagues, called out as he ran to catch up with me heading out towards the motor park. Like every other student, I was eager to go home after the government’s injunction that only top public officers were allowed to work, as a measure of curtailing the virus.
When I halted, I sensed a mixture of emotions on his face; excitement and uncertainty. When he tried to tap me to listen to his message, I cautiously avoided body contact, reminding him of the need to practice social distancing. “Dara, Dr Inniform is looking for you” Donald breathed out “He said that I should tell you not to go home until you see him”.

“Really? Do you why he’s looking for me” I said with all perplexity
Donald became antsy as he answered “It’s not just you. He also asked me to see him. He wants to talk to the top five students in our class. I overheard him telling ayo that he wants us to work with him in the case he’s handling. I saw it on the news last night that our school is to be used as an isolation centre. And if what I’m thinking is true, then…..”

“What?!” I cut him short “ Please don’t tell me Dr. Iniform wants us to have direct contact with infected patients. I can’t do that. God forbid! Don’t you listen to the daily news? The virus is easily contracted and it is killing people in their thousands and I’m not ready to die YET”
“But…”
“But what Donald, What”?
“This is what we’re called to do” He struggled for words. “Dr Iniform told me to remind you of the oath you took, the oath we all took. Barely two years ago, we were transferred to the Teaching Hospital. He said to tell you that he still has pictures and videos of you, of all of us, during the white coat ceremony, as we chanted the slogan “From Bench to Bedside”, the slogan which signified the transition from theory-based medicine to practice-based.”
Donald’s words were touching a core spot in my heart. He went on with his speech “He assured us of being covered with his license. Hence, we wouldn’t have to fear being unqualified students working side by side with professional physicians. Dara, There’s no greater teacher than experience and he’s willing to offer us that”
“NO” I screamed in defense. “I’m too young to die!” Even as I spoke, my heart disagreed with me. I reminisced the day I took the Hippocratic Oath. My joy had known no bounds as I smiled and chanted heartily.
The words were still in my memory, just like yesterday
“I swear to fulfill to the best of my abilities and Judgement of this covenant:
I will respect the hard won scientific gains of those physicians whose steps I walk, and gladly share suck knowledge as is mine with those who are to follow. I will apply for the benefit of all the sick, all measures which are required, avoiding those twin traps of overtreatment and therapeutic nihilism. I will remember that there is art to medicine as well as science, and that warmth, sympathy and understanding may outweigh the surgeon’s knife or the chemist’s drugs.
I will not be ashamed to say ‘I know not’ nor will I fail to call in my colleagues when the skills of another are needed for a patient’s recovery. I will respect the privacy of my patients, for their problems are not disclosed to me that the world may know. Most especially must I tread with care in millions of life and death. If it is given me to save a life, all thanks. But it may also be within my power to take a life, this awesome responsibility must be faced with great humbleness and awareness of my own frailty. Above all, I must not play with God.
I will remember that I do not treat a fever chest, a cancerous growth, but a sick human being whose illness may affect the person’s family and economic stability. My responsibility includes these related problems, if I’m to care adequately for the sick. I will prevent diseases whenever I can, for prevention is preferable to cure, So help me GOD”

I realized that I was bound to fate. I had declared myself a servant to humanity with my own mouth. I realized that the white coat ceremony was unlike a regular festival, it was more like a ritual binding on the heart of everyone taking the oath, the insatiable need to serve humanity at all cost even at the expense of one’s life.
Just as he did me, Donald was able to convince a total of seventeen students, which was quite above the count of the top five students he initially planned on convincing. We saw the pandemic as a golden opportunity to practice the oath we took and to make our transition from theory based medicine to practice based medicine worthwhile.
I finally let the tears flow from my eyes as I walked down the memory lane. I didn’t mind that my emotions were beginning to take the better part of me even if I was on live broadcast. Like Soldiers, my colleagues and I had heeded keenly to every instruction given by our supervisors as we worked with trained professionals to combat the virus. Sadly, we lost almost all the soldiers on my team, save for Dr. Kamsi and myself”
“Madam? Dr Dara, is anything the problem, do you have any comment to make?” The master of ceremonies called my attention.
I wiped my eyes with the back of the palm, cleared my throat, and spoke “It is an honor to be recognized for such a honorable achievement as this. For twenty three years, humanity has been fighting a deadly monster. Thankfully, we have finally overcome it. However, we do not forget the legacy of our fallen heroes. Heroes who although had the option of turning their backs, held firm to the oath of sacrifice they made to humanity. So on this day, I dedicate this award to Dr. Iniform and Comrade Donald of blessed memory. To all the doctors and student doctors who fought by my side and likewise, to the foreign heroes globally who put service to humanity above their lives” 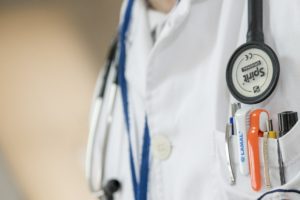 IN NEED OF A STETHOSCOPE?

A very nice write up. I just hope this isn’t a prediction this pandemic will last for 23 years 😂😂😂

I don’t want to imagine the world battling with a virus for 23 years. May God save us from such.

Nice write up….keep it up plss

As medical professionals and students, we should be prepared for the good and the bad. We could get notable recognition, receive a handsome salary, enjoy the privilege of the title, give to society and save lives in the process, but we should be conscious of the fact that it isn’t every soldier who goes to war that comes home alive.