“Iyatunde!” I stopped in my tracks. I don’t know why I did. Something about the voice that called out to me seemed familiar. Slowly, I turned around and looked at the little girl who was now hugging me tightly.
“Mother!” There was tears in her eyes, “you’ve returned. I missed you.” I looked down at the little girl who gripped my knees and who was in tears. Mother… Was the girl alright? Slowly, I pulled the girl away. Her eyes were bright red.
“Who are you?” I bent down slightly and looked the girl in the eye.
“Iyatunde…” The little girl withdrew from me. “It’s me, Iya. Your daughter…” Her voice was desperate, and tears began forming again. Despite myself, I gathered the sobbing girl in my arms. Something seemed oddly familiar about her. I didn’t understand what was what happening. I wasn’t even married. I was still in my first year in school.
I wanted to tell the girl that I wasn’t her mother, and somehow, I wanted to distance myself from her; to run far away. However, my legs and my emotions betrayed me. The little girl was dressed in her school uniform. How could I even have a daughter? Maybe I looked familiar. Maybe I possessed certain features as her mother.
I decided to take the little girl home.
The old woman I saw upon my entrance was my mother. But, how was it possible? My mom was at home, waiting for me. Suddenly, I began having those conflicting emotions again.
“Omobinrin mi,” the old woman stood up with some difficulty. She stared between me and the little girl that claimed I was her mother, disbelief written all over her face. “How did this happen? How’s it that you are here?” Her voice trembled, and she staggered. I knew she would lose her balance if we continued that way, so I helped her to a seat.
“Iya, kini o n sele?” It explained the incessant and frequent flashbacks I had been having for quite sometime.
“My daughter, you’ve been reborn; but, this time around, into another family. In your past life, you were Lola’s mother. You died after giving birth to her, that’s why you don’t remember your bond with her; nevertheless, you can feel it, can’t you?”
“Feel what?” I felt like screaming. Was this woman sure of what she was saying? Suddenly, fear gripped me. I had called her Iya. I had called her mother. “I don’t understand…”
“Just listen to me,” the old woman continued. “You’ve reincarnated. In your past life, you were already an accomplished mother. Your husband couldn’t bear your death. After you had left us, my son-in-law, who’s your husband, mourned you for sometime. Thereafter, he died too…” She paused to look at little Lola, who was now sniffing. “Lola’s an orphan. So, I took it upon myself to take care of her.
I can’t believe we’re seeing you again. I don’t know how Lola was able to recognize you. I did show her your pictures and told her stories about you. It’s a miracle. Olorun mi ti mu omobinrin mi pada si aye.”
I stood up with a smile. “Although I keep having flashbacks about my past life as you call it, I can’t accept this. My parents are waiting for me at home. I’ve overstayed…” But Lola politely interrupted me.
“Iya, please don’t leave me.”
Poor Lola. She didn’t know I wasn’t actually her mother. Everything seemed crazy and unreal. I pinched myself just to ensure I wasn’t having a bad dream. Was it really a bad dream? The old woman’s voice cut through my thoughts.
“Omobinrin mi, you aren’t dreaming,” she chuckled sadly, displaying her stained incomplete dentition.
“Iya mi,” I didn’t know when those two words escaped my lips. “I have to go now; but, I will be back soon. I’ll visit again, then maybe you can tell me how this came to be. I’m confused, and I can’t accept this.”
Lola tugged at the hem of my dress. “Granny, please tell Iya mi not to leave me again. Please grandma…”
I lifted the little girl up. “Lola…” I wanted to tell her that I wasn’t her mother, that our lives weren’t intertwined, that we had different and separate lives. But did we? Even I was unsure, but all I wanted to do was run. I wanted to exit this home badly, and I made up my mind not to return.
My emotions had a nasty way of betraying me; so, even as I resolved to leave and never return, I knew I was still going to come back here, against my wish. “…Mother will come back. I will visit you and granny very soon, and I will come with lots of cookies.” Lola smiled.
“Will you really come back to us, Mother?”
“Yes. Right now, I must return.”
“Where will you go to?”
“Home,” I said, smiling broadly. The little girl frowned, but she said no more.
I kissed my strange mother goodbye and left without another word.
My parents were pacing when I returned.
“Where, have you been?” Baba asked furiously.
“Baba, Iya mi, please calm down. Something happened today. Something… unbecoming and fearful,” I shouldn’t have made them worry, but I desperately needed answers, and I hoped they would give them to me.
“What happened?” My mom released me from her tight embrace. She had been very worried.
“I’ll tell you after dinner. Let me quickly prepare something for us.”
My parents exchanged worried glances. I went in to cook, after which I served them dinner.
“Baba, Iya mi, is reincarnation real? Does it have any scientific and religious back up?”
My parents were shocked. “There’s something we’ve always wanted to tell you. Finish your food, and we would tell you.”
This was it. There was something they were actually keeping from me. 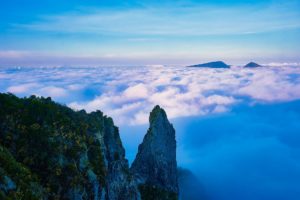