During my youthful years, the claims of abductions were rampant. At least a thousand claims per year. All TV stations were willing to leach off such conspiracies. When I was 18 years old, I’ve come across claims of people being abducted by “aliens”. Such cockamamie claims didn’t bother me until that fateful evening.

It was a windy afternoon, just got back from military training. Back then, all teens were urged to join the army. That afternoon, I came across a documentary. It was about Unidentified Flying Objects being flown by creatures tagged as “mini green men”. These claims were buttressed with very convincing pictures and actual witnesses who made the claim. “When I was abducted, I remember being placed on a surgical table, you know. And these… creatures, like they were examining me…” one of the witness said. I felt all these were just to gain attention and feed of the curiosity and fear of spineless rubes. “All these are poppycock” I thought to myself.

“I remember being operated on by some small man with a large head. He put his hand in my nose. It was really painful” another witness said. “Ridiculous” I said.

Undeniably, I became hooked up on the extraterrestrial. I began to keep tabs on such claims. I followed their news and all. Soon, I began to believe in such out of world claims.

On a Sunday morning, I got a call from Paul, and he invited me over for a TV night. I agreed. When the time came, I drove to his place. I passed through the woods and had this strange feeling that I was being watched but I just ignored them thinking it was just my thoughts. When I arrived we had some corn chowder and some drinks. I held back from drinking too much because I still had to drive home. We had a swell time. It’s been long I saw Paul, so we had a lot to talk about. After a few hours, I took my leave. Following the same path I took on my way there, it felt like the trees were taller but I blamed it on the little beer I had. I saw a swarm of beautiful lights, “Wow, what a beauty” I said to myself as I looked out of my window. Suddenly, it seemed the lights were doing a dance or something of that sort, they began to move in such fine ways that defied all I knew. At first, I thought I was seeing a satellite but that wasn’t the case. The lights began to move towards my 1970 Volkswagen Beetle. As if they were going to crash into my car, they disappeared into the trees.

I continued my journey. As I continued, it seemed the moon was coming closer to me. I stopped my car and rolled down the window, popped my head outside to have a better view. I noticed it was a bright orb and not the moon. Felt discombobulated at first. I rolled up my window. As I was about to turn on the engine, the bright orb began to circle over my car. I turned on the engine and zoomed off thinking I could outrun whatever it was. I thought it was over as I couldn’t sight the object anywhere. It suddenly appeared in front of my car, matching the same speed. I had a better look at the object and I could see some figures looking out of what looked to be a window from the strange object. The lights were blue and blinding. I began to feel dizzy. I knew something was wrong.

Suddenly, I blacked out. Well that’s what I thought, it felt like I blinked, and I was back on my way home. I stopped the car at the side of the road and looked around, nothing. There was no strange object or glimmering light, there was nothing. Maybe I was hallucinating. I continued my drive and eventually got home. Paul called me, and he sounded worried and asked why I hadn’t called him for the past two hours. Yes, the distance from my place to his was roughly two hours. Confusion struck me about what he was talking about. I just got home and it was smooth sailing from his place. I tried to convince him that I got his call as soon as I arrived home. We had a short argument about how long it took me to come home. He suspended the call when he figured I was alright.

I was getting prepared for bed but I wasn’t feeling quite myself. I felt something was missing but I couldn’t seduce what it was. It was disturbing. I rolled around my bed so much. I managed to sleep and I started having nightmares. It felt more like flashes of my past life or something. The nightmare haunted me for weeks and started affecting my efficiency during training. The sighting was of me being uplifted into a giant pancake. The experience was really horrific. When I told my friends, they suggested I called the UFO hotline. The case I had was like other claims of abduction. Though I was hooked up on the extraterrestrial, the suggestion felt far-fetched but it’s worth a try.

I called and explained my predicament. They requested for a face to face dialogue. When I got there, I told them the same thing I told them over the phone. They asked some questions about that night. After several apprehensions, I was led into a room where I met with a skilled psychologist. He asked some questions. And he began a process that was assured to put me in a trance state. When I was in the state, I was able to remember everything that happened and I began to tell the psychologist. He recorded everything. “I was beamed up out of my car by a bright light. They paced me on a table and four little creatures with big heads and large black eyes were touching me. They were examining me. One of them stuck a needle into my brain, he put something in me. They beamed me back to my car and I resumed my journey without any memory of what happened”. I summarized everything. The psychologist gave me some tapes that’ll help me to sleep well at night.

I remember the psychologist telling me that the device in my brain was some sort of tracking device. From the recording, I said they’ll come back for me. They’ll find me with that device. The surgeons couldn’t remove it. It was too risky. I had to live the rest of my life expecting when to be abducted again. I tried to revert my life to its normal state. Started hanging out with friends and everything was going normal. After a few months, I began to have those weird dreams again. These were more profound and clearer. Even while awake, I heard strange voices. It was the device. They communicated with me using the device. After a while, I began to understand them, and we began to converse properly. I asked about their existence, where they came from and what they wanted. They said they lived on a planet just like ours called Kreptan in universe TR-33P just 3200 light years from ours. Unfortunately their planet was destroyed and only few of them survived. They’ve searched the galaxies for species similar to them. They eventually found us and have been trying to crossbreed with us. Hearing their plans made me feel eerie. I asked about the device placed in my head. Yes, it’s a tracking device and for communication but it’s covered with our progeny. I began to shiver. What they’re trying to say is that an alien is going to grow in my brain. They unravel their sinister plan. We were like incubators. Once they’ve crossbred their young with us, they’ll discard us. It turned out they’ve taken many more. Those abduction claims were true. It wasn’t just an abduction, it was an INFESTATION.

I battled with this revelation for days but couldn’t tell anyone, they’ll think I was crazy. I wrote to my trusted friend about what I was facing. He believed but there was little he could do about it. Stories beyond abductions were usually trashed. The pain of knowing the truth and not being able to tell it. My head began to ache. I’ve used all sort of medications but no luck. I began to hear screeching poses that’ll make my ears bleed. It was torture. I couldn’t socialize with people anymore. It felt as if I was dying from within. Maybe it was the alien larvae growing in my head.

My situation began to grow worse. I began to see things that weren’t there. I couldn’t take it anymore. Someone must know. I got into my car and drove to the police station. Unfortunately, my time was up. The mothership appeared above my car and sucked me up. This time, I saw what happened. The aliens were terrifying. They were a mans nightmare. All of different forms. They’ve crossbred with other species. Two of the figures held my and put me on a table. I asked what they were doing, they were checking if the larvae in my brain was mature enough for removal. The extraction process was promised to be excruciating and would lead to my eventual death. I’ve met my demise.

They ordered me to concoct this write-up before they removed the symbiont from my brain to warn you all of their descent. I’ve said before, it’s an infestation. They’re coming for you all.

WE ARE NOT ALONE. 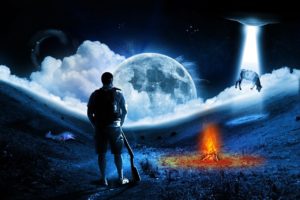 How true is this??
Please I am scared!

Lol. He is messing with your brain, not me😂

😂😂😂….this is more like some kind of movie.
The last paragraph though,how did med zone get this in the first place? I’m afraid he’s the next victim🤣🤣

Thank you very much 🥰

Something similar happened in “Beyond Skyline”…