It was within the closure hours of the school. The sun had risen to its peak that afternoon. I was heading towards the school park to catch a bus. On getting there, I caught a glimpse of a long disorganized queue. “Oh, God! Why do I have to join a long queue to get home every day?” I said to myself tiredly. While approaching the unending queue, I saw what looked like an unconscious body lying on the floor with people gathered around him.

All the people were out of ideas and didn’t know what to do, they just stood watching. Different thoughts ran through my mind though I was a medical student still in school. But, I was in a better position to render help. I ran as fast as I could run to the spot. I knelt towards the unconscious body to check if he was still breathing.
I tilted the patient’s head up to ascertain if he was still breathing but I discovered he couldn’t take a breath in a moment of 10 seconds. He’s not breathing!” I said. Bystanders which had formed a circle around him immediately jerked back as soon as they heard that. I grabbed the patient by his shoulders and shook him briskly. “Wake up!” I shouted, shaking him for a few seconds.
“Can someone please call the emergency line?” I had said. I pondered on what might have happened to the man. What came to my mind was that the patient must have suffered from a cardiac arrest and the first aid I should give is the Cardiopulmonary Resuscitation (CPR).
Hence, I was about to start CPR. I recalled that if a patient needs CPR and it’s not done, it may lead to death. But, if it is done when it is not needed, it doesn’t have an implication. Notwithstanding, It was an emergency case and I needed to keep the patient alive till the ambulance arrives. More so, performing CPR quickly and accurately on a patient can increase a dying person’s chances of survival by three times.
I unbuttoned his shirt as he needed ventilation, then I placed my hands on the center of his chest right below that imaginary line between the nipples, pushing hard as fast as I could about two times per second. I did that in other to compress his chest to move blood through the brain so as to keep it alive until the heart starts working.
The memories of the first time I performed a CPR test on a dummy back in college flashed through my mind. Even though I had received lectures on the steps to perform it, I still felt some adrenaline rush through my body when the dummy was placed in my front. The examiner wasn’t a very friendly one with his timely corrections.
While I was still curious about what to do, I heard the examiner say: “Are You dealing with a sick or a healthy person right now?” I understood what he meant, I compressed the dummy so hard and fast thinking I was doing the right thing. “Okay stop” the examiner had said. “You just broke your patient’s rib, the compressing depth should be 4-5cm, and you however crushed that patient with a compression depth of 6-7cm” he continued. “But this isn’t a real human” I had said to myself. I didn’t pass the test not until I did it again almost perfectly.
Well, I was glad I could remember the steps of CPR and think clearly in an emergency situation. After about thirty compressions, his pulses and vital signs were back but he was still not awake. So, I gave him a rescue breath (mouth-to-mouth resuscitation) twice. As I was about to give another round of compression, the patient resuscitated with a cough.
Some minutes after, the ambulance arrived and the health workers commended me for the first aid I had rendered but their only complaint was that I didn’t do the chest compression hard enough. I think it’s because I subconsciously worry too much about breaking someone’s ribs.
“What would they have said to me if I had failed?” I soliloquized. 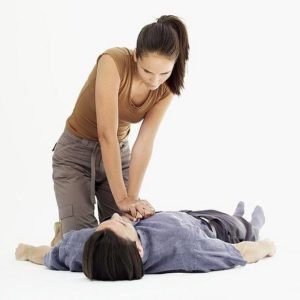 Wow what a courageous act tho

This is wonderful, keep it up