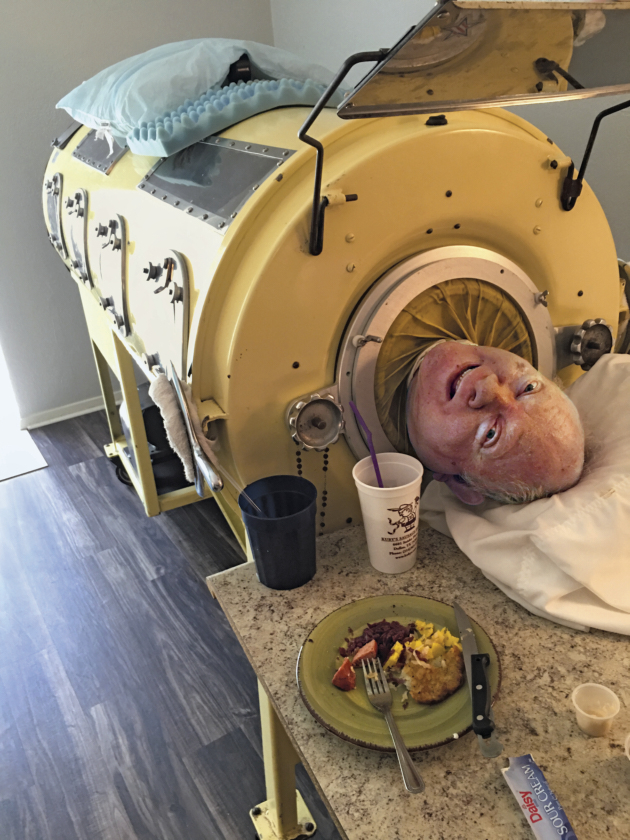 The story of the Man who Lives in an Iron Lung

Paul Richard Alexander Contracted Polio at the Age of Six

A few minutes later, another doctor dashed into the room, picked him up and ran upstairs with him. What was he about to do to the dead boy? The doctor quickly performed a tracheotomy on him and placed him in an Iron lung. A tracheotomy is an incision made in the trachea (windpipe) which forms a temporary or a permanent opening that relieves any obstruction in breathing. Even after performing a tracheotomy and placing him in an iron lung, he still didn’t wake up.

Why did Polio Patients need an Iron Lung?

Three days later, Paul came alive. He couldn’t move neither could he speak. His body was encased in an iron lung. The iron lung is a large horizontal cylinder In which a person is laid with their head protruding from a hole at the end of the cylinder. The head is exposed to ambient air and the rest of the body is sealed in the iron lung. The iron lung uses a mechanism of negative pressure to take air into his lungs and this helps him to breathe.

What happens to your body in an iron lung?

When Paul was 13, his parents enrolled him in a school program that supported children learning from home. He was learning from the comfort of his home. He knew that if he wanted to become anything useful in life, it was something that has to do with him using his mental ability. In addition, He couldn’t play basketball or do anything involving his physical strength. It just had to be mental work. When he was 21, he graduated from high school with straight A’s. He just had a B in Biology and that was because he couldn’t dissect a rat which was part of their assessment.

After his high school, he applied to a University in Dallas. But, despite his excellent result, he was rejected because of his disability. They said he was too crippled to go to school. This severely shattered the heart of Paul. Paul never gave up. He would call the school trying to convince them why they should admit him into the University but his pleas fell on a stony ground. He kept on calling them frequently trying to persuade them. Paul’s high school teachers also fought for him. They spoke to the University about Paul several times.

Paul Did Something That Shook The World

After two years after fighting, he was admitted into the school based on two conditions. He had to get someone to help him whenever going to classes and he had to get the Poliovirus vaccine. It wasn’t so easy for Paul. He was the only crippled in his department and he barely had friends. Along the line, he was transferred to another University and in 1978, he graduated with an excellent result. But, that wasn’t all. He went on to acquire a postgraduate law degree. Despite being disabled, Paul took his bar examination and passed beautifully well.

However, Paul also did something that shook the world. With the help of a pen attached to a stick, Paul wrote a book entirely with his mouth. The book was a biography about himself. He did that to inspire people never to give up irrespective of the challenges facing them. He wanted to show the world that he could accomplish the things they said he couldn’t. Also, He never allowed Polio to defeat him but rather, he defeated it.

Is the man in the iron lung still alive?