They say-“what an adult sees while sitting down, a child can’t see while standing”-

Hmmm, sounded like some superstitious nonsense to me but I couldn’t be blamed, I was only 15.
I accepted the expression after I met the supposed love of my life which almost caused me my life.

As a young boy, I’ve heard million of advices, “stay away from girls”,”focus on your studies—yada yada yada”. After hearing such things, I’ll usually think to myself that being a 15 year old in 100level isn’t an easy feat. I couldn’t help but think I was above everyone being that young and almost smarter than everyone.

Anyways, it all started on a Monday afternoon, we were done with our lectures and most of us should’ve arrived at home except for the “waka-waka people” who could easily traipse around the school.
I got home, took my bath and had my usual bread and fried egg. We were supposed to have an online lecture but I was feeling really lazy to pay attention. I managed to motivate myself and I partook in the online session. After the class, as I was about to turn off my data, I received a message from an unknown number. It read “Good evening, my name is Chiamaka, I need your help with some topics we’ve treated”- feeling reluctant to open the message, I thought “lemme just do good sha”. And that was how it started.

I managed to run out of the house just in the nick of time as Chiamaka exploded into thousand bits. I fractured my ankle in the process. I was almost sure that I’ll never be able to love ever again but I’m human and I can’t always suppress my feelings. The experience was an eye opener. Then and there, still lying almost unconscious next to the gutter, I agreed that “what an adult sees while sitting, a child can’t see while standing up”.

Wouldn’t you like to know what happened???
Here it goes

I opened the message but before I replied her, I checked her display picture and OMG it was like I was staring at a goddess of some sort. Her skin glowing like that of someone bathed in honey, her smile was as beautiful as a sunrise over a lake, I knew I’ve entered “gbese”— I was ‘in love’, I thought.
I became nervous, trying to come up with a cool reply. “Good evening, I’ll be glad to help you. Tell me the topics you need help with”—- I replied. She sent a list of five topics containing words that my feeble mind couldn’t comprehend. “Ghen ghen, I don’t know all these o” I said to myself as I strained my eyes to assure myself that I’m not seeing double. “I have to impress this girl o” I thought to myself, ”Give me some time to form a more comprehensive notes on them” I said to her and she appreciated the gesture with a thank you and a love emoji- to me, that was a clear sign that we had a connection.

I was so happy thinking that I’ve met the love of my life. I began to interrogate google like I was trying to be part of the FBI, I searched all websites and textbook for answers and I successfully came up with a long note filed with grammar that I was even unsure of. I quickly sent it to her feeling cool, she replied “thanks so much, I’ll go through it and I’ll get back to you if I have any problem”
“No problem, uhmm, anyways… are you the one on your dp”—I asked with a little fear of being savagely replied.
“Lol, yes I’m the one”— she replied

When I read that, I started planning our marriage in my head. Don’t blame me, I was 15 for Christ sake.
I replied her, complimenting her beauty and from there we got to know eachother better. As the last born plus the fact that I’m attached to my mum, I told her about Chiamaka and our online love escapades. We laughed and all then she warned me to be careful and that I should avoid anything that’ll distract me from my studies. All those jibber jabber didn’t really matter to me, “I’m the smartest” I thought to myself.
I haven’t actually met with Chiamaka before, I was still trying to play my cards right. Just before I could shoot my shot, she sent some questions concerning the note I sent her and asked if we could meet physically and treat them together. “Grrrng, grrrng”, my head began to ring. I quickly accepted the proposal and we planned a night to meet up.

The night came, I made sure I looked as nice as possible. I got to the lecture all and I easily spotted Chiamaka, her body was scintillating, it was like I was seated next to the sun. We exchanged friendly greetings and started with the work. Strangely, I was having problems answering the questions she had.
“Seems unlikely, I formed the note myself”- I thought to myself
After several minutes of battling with my past knowledge, I was able to solve them and then she agreed to the process.
“You’re really smart”- she said as she landed her hands on my thigh
I could feel my head swelling up with excitement. “She has fallen into my trap”- i thought to myself not knowing I was the one falling into a bigger trap.

Weeks flew by and it seemed our love story wasn’t coming to an end. We’ve started dating but I didn’t tell my Mum about it, I’ve drifted away from her unknowingly. My behavior also changed, i stopped attending classes just to spend time with her, I spent all my savings on her, I was losing myself slowly. Soon, the change started affecting my grades, my unmatched intelligence was reducing by the second.
My friends began to warn me about her, that she’s influencing me in a bad way but I’ll always shun them when they speak ill about the love of my life.

After missing numerous calls from my mum, I forced myself to pick this one. She told me how much she has been worried about me and asked me why I’ve been missing her calls. I told her I had some problem with my phone. She then told me that she had a revelation about me, “Here we go again”- I thought to myself. Coming from a highly religious family, my parents we quick to believing such prophecy. “ I saw an evil entity lurking about you in form of a friend, and she suggested that we start praying and…” immediately I heard that, I cut the call and flung my phone to direction I didn’t take note of.

As time went by I noticed that something was wrong with me, I couldn’t decipher simple mathematics, my friends began to avoid me and I began to lose weight. Maybe I should end things with Chiamaka. I called her and asked her if we could meet up. She told me to come over to her place. I got dressed and hurried to her apartment. I knocked but no one answered, I tried calling but no network, so I just let myself in. As soon as I entered I knew something was wrong. I felt a little light headed and there was this continuous reverberating sound like someone was perform some sort of Aztec ritual. A shadow figure emerged from the end of the room, “Chiamaka, is that you??”— I said already sweating profusely
She mumbled something that I couldn’t understand and swoosh a wind from her direction threw me away. Chiamaka began to oppose the laws of physics by floating. I was perplexed by the sighting.

-Previously, before going to her place, I called my mom and told her what has been going on and I apologized to her about my behavior towards her. She accepted and gave me some ancient mantras and praying point-

Now that we’re on the same page, I guess it’s only fair to believe that what an adult sees while sitting, a child can’t see while standing. 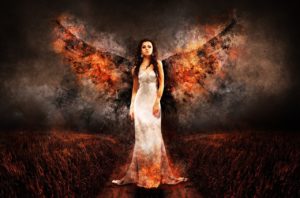 Okay. This is really a nice article😂
It’s like a reminder of my story.
But then please do well to complete it

Thanks for you review 😅
Stay glued to the platform for more

Last edited 6 months ago by blackkorede
0